Evelyn: When shopping for red dot sights, I sometimes see the word ‘Direct Bulb’ in the product parameters. What is the direct bulb?

Stephen: According to the light source, reflect sight can be divided into ‘direct bulb red dot’ and diaphragm red dot. ‘Diaphragm’ is the traditional red dot light source technology, while the direct bulb technology is more advanced and modern.

Evelyn: What is the advantage of direct bulb red dot sight？

Stephen: In short the advantages of direct bulb can be summarized in the below three points.

Evelyn: Can we talk about them one by one?

Since the light source of the diaphragm red dot is diffuse, the brightness of the red dot projected onto the lens through the small hole is various on different position of the lens and usually strongest in the center of the lens, and when aiming at the target through the edge of the lens, it becomes dim or even disappears. In general, the red dot brightness is altered by its position.(Figure 2) 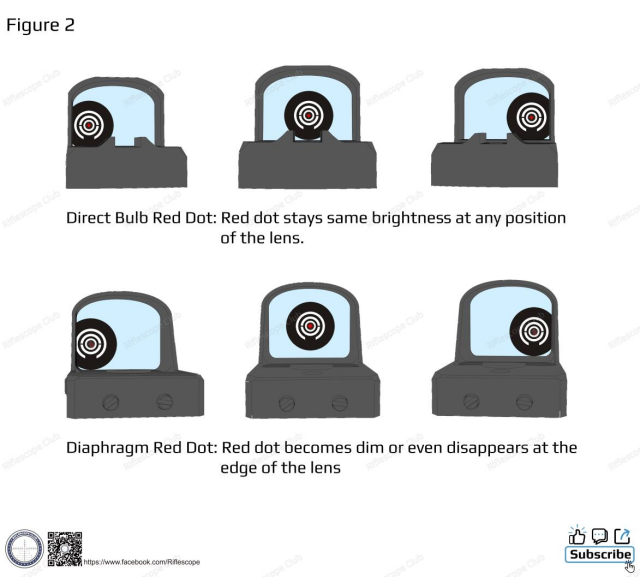 Stephen: Direct bulb red dot sight can maintain its brightness regardless of the position on the lens, minimizing the limitation of the use of the red dot. It’s stability is a big advantage in rapid shooting, once the target is in sight you can aim at the target with any position on the lens instead of having to use the center of the lens.

On the other hand, when the lens is partially broken or covered by mud stains, you can use the intact part to aim; in extreme weather such as snow and sand, the red dot always remains strong, stable and bright to ensure the shooting experience.(Figure 3) 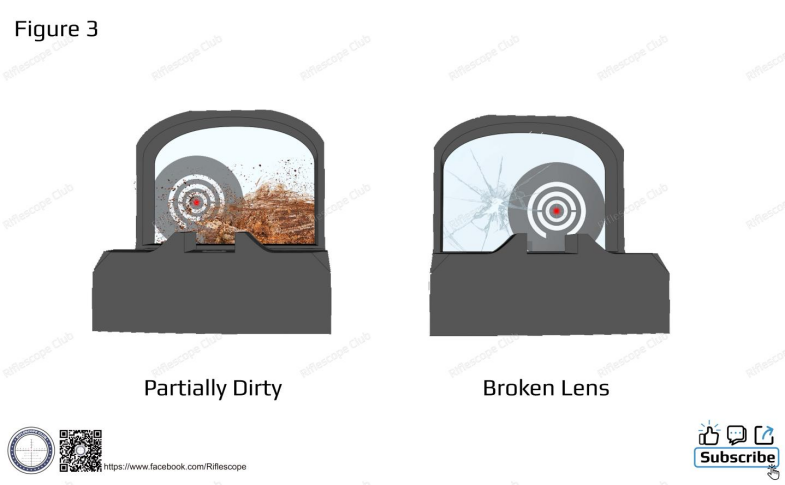 Stephen:The runtime of the red dot is mainly determined by the chip, the light source and the built-in program. Diaphragm red dot sight’s dot size is controlled by the hole size. It actually emits much more light than we can see but is obscured by the diaphragm which consume more battery power.

Stephen: The tiny hole in the diaphragm is formed by chemical corrosion, the edges of the hole is not perfect round but irregular. When we look through the naked eye we will find some scattering at the edge of the red dot, while the direct bulb red dot sight project the dot directly on the lens can avoid this problem. In addition, the red dot presented through the corroded diaphragm have a certain defect rate and will form irregular dots as shown in Figure 4. On the other hand Direct bulb red dot sight‘s dot can be made smaller and rounder with fewer defects.

Evelyn: I got it. Thank you for your sharing, Stephen!

Stephen: You are welcome.

NextTrue mastery of any skill takes a lifetime---2021 June Newsletter

PreviousHow to Resolve Scope Elevation Not Enough for Your .22 LR or Airgun? Try The Adjustable Scope Ring.