【Weekly】Wire reticle vs Etched reticle vs Fiber reticle, how to choose?

Shooting under strong sunlight conditions? We have a solution!

Having trouble in shooting under strong sunlight conditions that the reticle dot gets too dim to see? Here’s a solution from Vector Optics! check out our Constantine 1-6x24i Rifle scope Fiber Dot Reticle (SCOC-36)! It’s compact, durable and has a wide field of view, most importantly, it adopts an advanced fiber center dot reticle with 11 levels of red illumination, can be even used under the strongest sunlight!

*Click the picture to order, for cooperation, please get in touch withher@vectoroptics.com

When using rifle scopes, shooters would notice a pattern of fine lines or markings on the lens, which is namely the reticle. There are mainly three types of reticles when it comes to rifle scopes: Wire reticle, etched reticle and fiber reticle. What are the differences among the three reticles and what scenarios are they mainly used in? Read more to find the answers!

The wire reticle usually presents itself in a crosshair and is stretched and fixed in the sleeve to form the aiming point. It is the most common type of reticle in scopes due to the low manufacturing cost. The advantage of wire crosshairs is that they are durable, and provide no obstruction to light passing through the scope. However, the shock resistance of wire reticles is weaker than etched reticles, the wire crosshairs may get damaged from drop force, recoil or incorrect mounting. The metal wire material also makes it unable to form complex reticle patterns.

The etched reticle is that the aiming line is directly engraved on the center lens, hence, the shock resistance and durability is better compared with wire reticles. The etched reticle can realize complex reticle patterns, such as Christmas tree style reticles, reticle lines can be made thinner than wire reticles, depends on different manufacturers, which also means that it can be more accurate than wire reticle. However, the etched reticle usually has a higher manufacture cost as it involves a series of process like coating, etc. Besides, it is easy to accumulate dust and fog during assembly, affecting the light transmission rate.

The fiber reticle uses a very thin fiber optic light pipe pasted behind the wire for illumination purposes. With the fiber reticle, it can ensure the illuminated dot can be seen and used under the strongest sunlight. Meanwhile, when shooting at low magnification like 1x, you can use two eyes open and acquire your targets rapidly with the bright center dot (similar as the red dot sight shooting). It also inherits the advantages and disadvantages of wire reticles. However, the manufacturing cost of the fiber reticle is higher, and like wire reticles, it cannot achieve complex reticle patterns and the shock resistance capability is weaker. 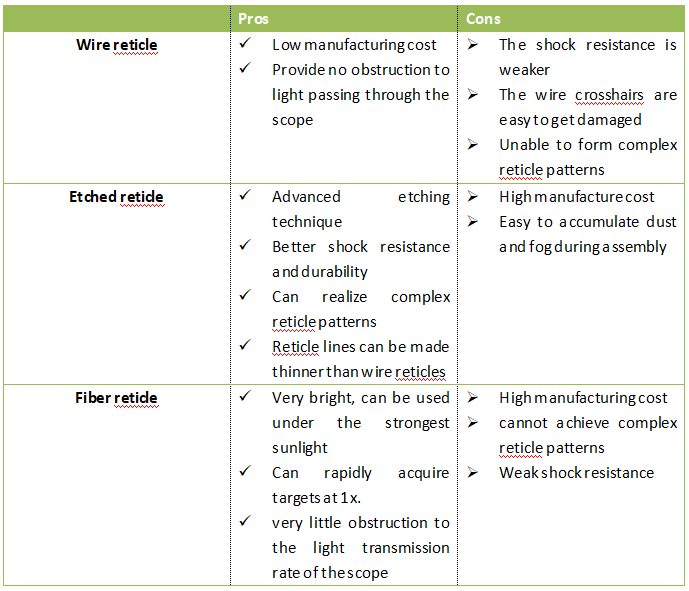 There are mainly two types of light sources that illuminate the reticles of the scopes: LED and fiber. And red is the most commonly used color for the illuminated reticles, because it is very easy to see in low light.

lThe LED light source is the most common one used in riflescopes. It is powered by watch-type of batteries and has multiple illumination settings, which can fit all light conditions.

lFor Vector Optics, the new fiber dot reticle riflescope uses fiber to illuminate the center dot of the reticles, also powered by watch-type of batteries. The main features of fiber illuminated reticles are that the illuminated dot can be very bright, can be even used under the strongest sunlight; besides, when shooting at low magnification like 1x, shooters can use two eyes open and acquire targets rapidly with the bright center dot.

*Check out the chart below for main features of either light source.